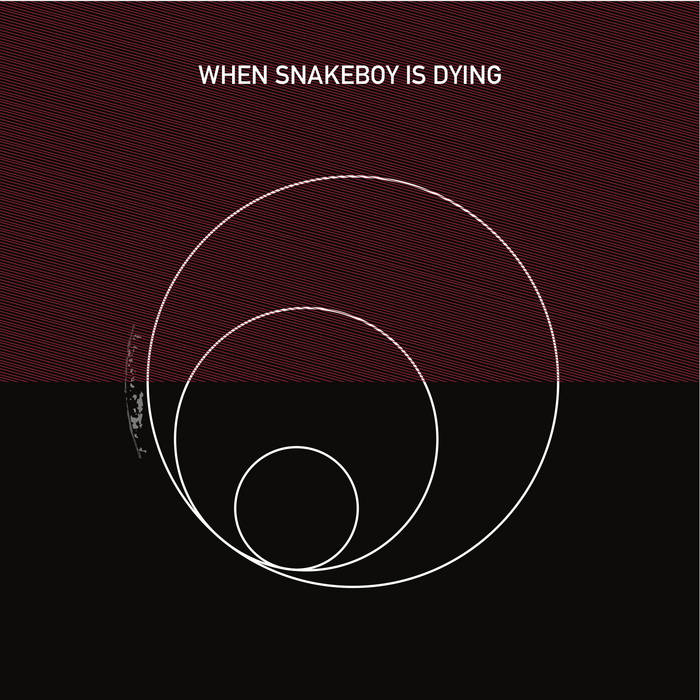 ”When Snakeboy is Dying” is the first album of Robert Piotrowicz in which he deploys a broad spectrum of instruments. Most of his previous published compositions were committed to creating a multilayered electronic sculpture built with analogue modular synthesizer.
Performing on all instruments by himself alone and using a variety of composing methods, Piotrowicz created an album which strikes with internal integrity and organic complexity whilst leaving the recipient with an impression of listening to an ensemble. In terms of tonal reduction and assigned function of individual instruments, the score recalls the spirit of minimalism, however the density and dynamics of narration remains in vivid contrast to such associations. The strength of Piotrowicz's work reveals itself in the complexity of events as well as the rich palette of colours and the mobility of architecture in the overall sound picture. The instruments are organized in careful relations with each other, to build not only the horizontal tensions but the vertical ones as well. The beauty of microtonal constructions is amplified by strong impacts and vitality of electronics. What at first might seem like a fragile recording, with every further second it builds and maintains drama and intensity.


"The Necessary bite.
Robert Piotrowicz, a solitary figure on the Polish music scene, is primarily known for his fierce electronic compositions and improvisations of coarse-grainded texture, which hit the music mass with a direct blow. With the new album "When Snakeboy is Dying" he catches us off-guard with electronic and acoustic subtlety of the matter, a mutual weaving of these membranes, which combined form a radical structure. Contrary to a straightforward assault, they bring relentless yet scrupulous intensity. What is at stake here is the intensity of Piotrowicz's unique and idiosyncratic language, which resists comparisons with other vernaculars, but may only admit affinity with a likeminded expression and rigor. Rather than submitting to explicit emotions, Piotrowicz carefully negotiates the space between creation and destruction of the form, and astonishes us with a cunning structure marked with cavernous chasms and turbulences. On the serpent-like path through five musical pieces, the composer lays down his traps, which keep the points of formation and obliteration in disguise. Through this analogue recording Piotrowicz achieved physical and direct rupture, creating a caesura in narration and temperature where even the simple gesture of turning the vinyl disc from one side to another is not a rudimentary act, but a symptom of change in language and sonorous morphology. The new album maps out a new territory yet on another level - the author concentrates on unveiling much subtler elements, such as piano, guitar, vibraphone, and integrates very tranquil, almost fragile passages, only to crush them down and penetrate with an unexpected raid. His attack is microtonally precise and microscopically flawless. Its prowess lies not in delivering an aggravating punch, but a precise needle sting, or a fine but nonetheless deadly bite. Although Piotrowicz traded fists for subtler instruments, they are all the more capable of intoxicating and unsettling the listener, causing the turmoil inside. The recording reveals a merciless exploration of emotions, there is an ever present tension and attack, a myriad of tantrums and burgeoning undercurrents that seek critical distance from one another. Such complex devices may shake the fundaments of the world of reason, order, and rationality, even though "When Snakeboy is Dying" is an opus of precise musical execution and acute compositional planning.

Instead of linear structures and distinctive pulse Piotrowicz designs a musical cluster, however it does not mean that its rhizomatic shape (in a Deleuzian meaning of this word) is not governed by compositional logic and its own internal rules. Interlacing patterns of individual sonic fibers form labyrinth-like structures and flow in subterranean passages only to erupt again in their full glory. The inspiring paradox of the whole album is that while it does demonstrate a determined formal structure, or rather the entropy of its variables, it resists the memorization. Although we may decipher individual patterns and rigorously defined connections between all five pieces, Piotrowicz moulds the album from pure shapes and sounds, and has nothing in common neither with the amorphousness typical of most contemporary improvisers nor with the shapeless magma of noise.

On the contrary, the album gives the nod to programme music traditions, at core of which lies the penchant for narrative and storytelling. Through the transfiguration of the main protagonist as an allegorical symbol of self-affirmation, enlightenment and individuation, Piotrowicz unveils a story of five different stages of self-formation which correspond to five pieces on the album. Whilst this personal Bildungsroman offers a story of metamorphosis, alienation and perseverance with elements of para-ritualistic initiation, it must be understood as lacking any religious underpinnings. Piotrowicz distills the allegory of borderline existential experience, where the acts of rupture and fissure are crucial to self-knowledge and breaking through to the core of one's being. The possibility of Snakeboy's transfiguration is inseparable from the necessity of the bite. Perhaps it is awareness of the irreversible, which one may not turn away from. In this affirmation of being and becoming, Piotrowicz concentrates on a sharp, clearly defined mass, formed from the universe of disarray, confusion, uneven planes and curves. Saturated with irritation that stems from uncompromising complexity, the album proves that the composer is unwilling to take the easy road."
Lukáš Jiřička, March 2013